“SO CLOSE, SO FAR” analyzes the changes provoked by technology especially concerning the knowledge construction and information distribution, particularly visual information. Within this project, the piece “Let´s be honest” has been made.

The artwork consists of an object and a video. The object is a helmet with a built-in led sign hypothetically capable of reading the thoughts of the carrier. The video collects the experiences of several subjects with the helmet, as a metaphorical portrait of their thoughts. 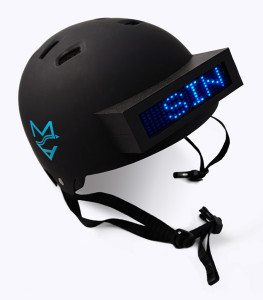 The artwork “Let’s be honest” has been selected for the collective exhibition EAC 2014.

It has also been awarded with its acquisition at this event.

Stills from the version of the video for being exhibit in a TV monitor, 6′ 46” length.